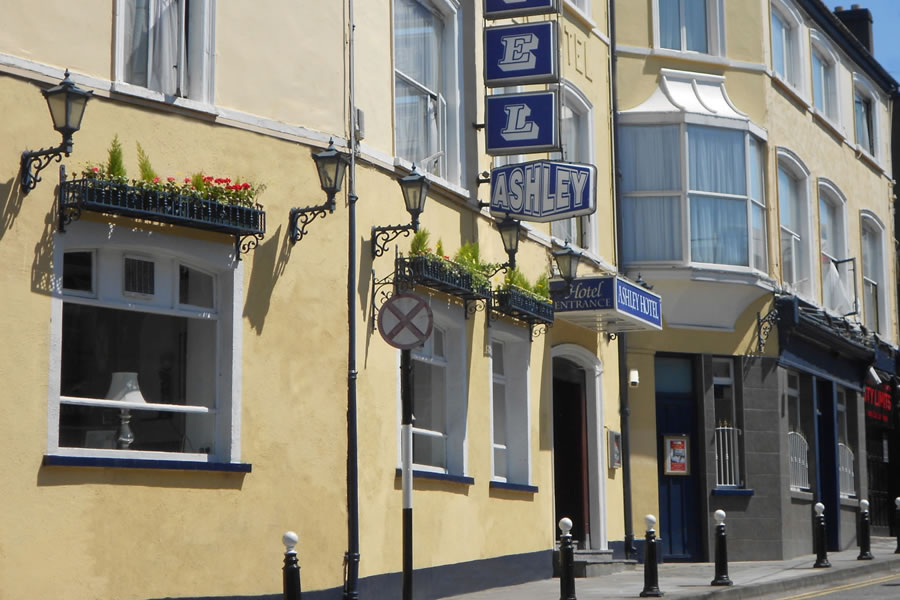 A warm welcome awaits you in the Ashley Hotel located in the heart of Cork City. The Hotel is family run by Anita Coughlan and her friendly team. The Ashley Hotel Cork City has a secure on-site car park with CCTV coverage. All of our 27 bedrooms have bathrooms en-suite. Our hotel has a delightful lounge bar and restaurant area and is very close to many of Cork's finest restaurants as well.

Check Out Up To

The hotel is on Coburg st which is right in the heart of Cork City From the Bus Station to the Hotel is an approx. ten minute walk. Go to the main entrance of Merchants Shopping Centre on St Patrick's Street, walk across St Patricks Bridge and go to the BASE of St Patrick's Hill and the Hotel is located on the left.

Cork City has so many wonderful attractions for you to consider, from it's world famous Jazz festival, its vibrant Cork Midsummer festival and the Cork Opera house. We are 5 minutes walk from the Train and Bus station. We truly at at the centre of it all, in this vibrant and fun city.The Ashley Hotel is the perfect place for you to relax unwind and have fun, Ideally suited with all the benefits of a city centre location to all shops and other attractions.

Things To Do In The Area

only giving one star rating as i have to in order to post comment but would not give any rating we stayed here on the 19th of june for the tom jones concert it was the worst place i have ever stayed in it was too late and too busy due to the concert and the irish open going on in cork.the room was dirty smelly and noisy .the bed linen was dirty the shower hose mouldy and curtains that were meant to be white were grey.this was my sisters 40th birthday present and it was a disaster .i dont know how this even passes as a hotel and rates any standard. olivia .carlow

Perfect location, very friendly and helpful staff. Room was grand, a little on the small side. Bathroom was very cold but did its job. Room and bathroom were to a good clean standard. Bed was very comfortable and a good nites sleep was had. Breakfast was just coffee and juice for myself but they had a good selection of food available. Would stay there again.

The hotel has a great location in city centre Cork and the staff were very nice. The room was a little cold and damp when we arrived. They did give us an extra heater and it improved somewhat, but heating/ventilation system could do with an update. It was good value and we enjoyed our stay.

i wanted hotel that was near the city and to use it as a base. This hotel was perfect. The hotel is only approx 15 minutes walk from the Rail Station and also the main bus station. IT is located only a stone throw way from Patrick Street. This hotel was the perfect choice in relation to location as my husband and I were out for most of the days of our stay in Cork. The bedroom was very clean and warm. The bedrooms were very secure as there was always someone at reception and the accommodation area was only accessed by key only. The bathroom in our bedroom was huge. The bedroom we had was at the front of the hotel so it could abit noisy with 2 pubs across the road and the hotel was near a Comedy club but this was not a negative to us. The main receptionist was very friendly. Breakfast was a mixture of a full Irish and/or fruit, cereal which was a good start to a day. We did not use the lounge or bar facilities and therefore i could not comment on this area. I definitely would recommend this hotel to any of my friends who want to use it as a base. I would give it a Four Star as a 3 star would indicate that there was someone wrong with it which was not the case.

nice staff, nice cosy bed,breakfast basic. bar and drink[guinness not up to standard.all right for one night stay. two star.

I can honestly say that I have never stayed in a hotel as bad as Tha Ashley. Rooms old and grotty, Floor uneven, Shower not working properly. Toilets stinking, No soap, No lights. Breakfast swimming in grease was unable to eat it. Had to move room twice before we settled for one which was still terrible. Place should be shut down. At least take it off Lidl breaks to save embarassment. I am only giving it a star because I can't send this without a rating.

Very near to the road and right beside a funeral home not somewhere to go if you are feeling a bit off and want some r&r!!!!!.enjoyed the stay the staff were friendly.it was a pity that the restaurant wasn't in use for evening meals or lunches

hi, the hotel could have been better, we got a very nice welcome when we arrived, but the tv in the room was not up to standard, we had pains in our neck by looking up at it, (it was too high up). when we went for breakfast, we had to wait at least 5 mins for someone to attend to us, when we got the irish fry up it was mostly oily on the plate, eggs were burnt on the sides, all in all it was a degrace, then when we were leaving the owner was a bit angry, we were so surprised, but we didnt say anything, we just got our bags and left. the star rating would be 2 star

This hotel is in desperate need of modernisation. All rooms have only 1 radiator, which made the bathrooms with tiled floors like an icebox. The first room I was given was tiny, high ceilings and 1 small window which you could not see out of. The second was not much better, either was the 3rd but it was the best of a bad lot. I should have expected this after payment was required in full on arrival. Breakfast was ok, but a bit on the burnt side. When I asked for brown bread I was given some a couple days old, although they tried to hide this by toasting it first. On a good note, the beds were comfortable with plenty of blankets, and the staff are really friendly and helpful, which is why I gave 2 stars.

The hotel is well run and the owner is extremely professional, helpful and friendly. The other staff members are also very nice. I was very disappointed with the bed room because the bathroom area was bigger than the bedroom area and the bed was pushed up against the wall. I found the bedroom very claustrobhobic The other concern was with the bar area the hotel closed at 11 o clock nightly with a night porter on duty up to 2 o clock and he had a very limited selection of drinks. The dining room was very nice , the breakfast was good and there was limited free parking.

As a frequent user to todayfm breaks I was dissapointed with the Ashley Hotel. It was obvious the helpful staff did a great job to make myself and my four friends welcome. The downfall was the hotel itself. The bedding in the triple room was damp. Areas of the upper floor were cold, it was obvious there was moisture in the air. I took a shower in my room and the bath tub leaked all over the bathroom. I just feel dissapointed that this Hotel was awarded 3 stars because it dosent do justice to the other hotels that have earned 3 stars.

We spent one night at the Ashley Hotel on a visit to cork. The staff were extremely helpful and friendly and the location is very central. The rooms are a bit cramped by modern standards and we needed extra bedding as the room was cold. The bathroom was a bit of a let down, seventies decor, lukewarm water. If this was addressed the hotel is great value for money

this hotel is of very poor quality. the building and furnishings are old and quiet dirty. The food is really very poor, and designed to get a good profit for the family owned business. it is in a good location but there also several hotel in same location which charge the same prices. the area is not really safe after 9pm.

We didn't get to stay at this hotel as the manager put us down for the wrong date and rang me the day before our scheduled arrival apologising and saying that the hotel was fully booked. This was disappointing for us. However, Anita did make a big effort to help us in finding different accomadation.

Following our recent stay at the Ashley Hotel we were dissaapointed with the standard provided. While the staff were friendly and helpful and the hotel clean, we found the room cold . The water in the bath/shower was a dirty brown colour at first and was not hot enough for us to shower. The breakfast was almost cold with sausages that seemed to be gone off or out of date. We sent a similar email to this one to the hotel after our visit but they did not reply. We could not recomend this hotel to others.

Stayed in the Ashley Hotel for a shopping weekend with the wife 03 02 2012 for 3 nights .Good points it is central to cork city and staff are very welcoming .Bad points the room was very small and old fashioned . The heating was not very good .The shower was very slow to heat up and was not very well mantained.The towels were old and rough textured.very limmited tv channels Wicklow Couple

The hotel was very central only a short walk from all main shops and resturants. The staff very friendly and helpful, lovely breakfast served, I would stay here again.

stayed at the ashley hotel in october found the staff very friendly .The room was nice and clean,VERY central to everything. the opera house and city centre only five min walk . Limited car spaces at hotel.....BREAKFAST wasnt freshly prepared it looked and tasted as it had been there a while............................

We had a very pleasant short breakin the Ashley Hotel in Cork. The hotel was central, clean and friendly with a good breakfast. We found the Lidl break to be excellent value for money. 5 stars for value RM.

Hotel ideally located for walking access to main shopping areas. Staff extremely helpful and courteous. Good breakfast. Main drawback - no heating in the bedroom, which was very cold. The extra bedding provided to compensate this led to an uncomfortable night's sleep. Shower was luke warm. Would suggest providing some form of heating during the cold season and sorting problem with lack of hot water.